During the 24 Hour Read-a-thon I set out to read the end of Between the World and Me, which I followed up by reading The Beautiful Struggle: A Father, a Son, and an Unlikely Road to Manhood. Along with Woman at Point Zero, it was an intense 24 hours. For those interested in Ta-Nehisi Coates, author of The Case for Reparations— my personal favorite of his– then these books are a logical investment.

Clearly, I read them in the wrong order, BTWAM being our November 2015 book club pick, and TBS a thrift store find a month or two later. Perhaps reading in the proper order would have told a different story, but reading the end of BTWAM before TBS provided a reminder of who Coates is today before seeing where he’d come from.

Miles Davis is quoted saying something along the lines of, “Man, sometimes it takes you a long time to sound like yourself.” That, right there, is the relationship between these two books. 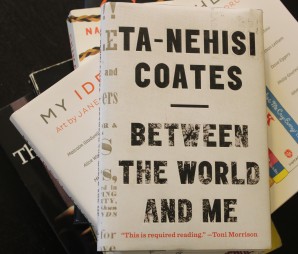 TBS, as its title implies, is about being a son. It’s the insight he gained being the offspring of Paul Coates, who was at times a scholar, or an activist, or a player– more commonly some fusion of the three. It’s a more conventional coming of age story, following Coates from his early childhood to his college acceptances. TBS is a great memoir that contextualizes much of what comes in the next book, but BTWAM is a different beast altogether.

In contrast, BTWAM is very much an indictment of racists and racism. The writing is different, as though Coates had aged enough in between the two books to put a bit if pass in his voice. Read both, and be shocked at how one man can chronicle the same life in two distinctly different voice. It forces readers to find the story of America within the story of one man. It’s a memoir in the style of Baldwin.

“You must put yourself in the skin of a black man…” wrote Baldwin back in 1963, writing to white readers in one of the two essays in The Fire Next Time. Coates doesn’t say that, so much as he provided the vehicle– the text, comprised of personal experience and analysis– for that to happen. 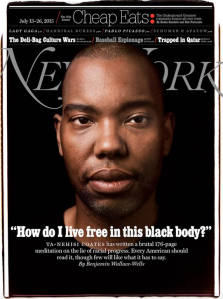 BTWAM is structured as a letter from father to son, in contrast to TBS, which is laden with a son’s observations of his father. I wrote in an earlier post (What I’ve learned from the books I hated) about the letter format as a literary device– this book wasn’t written for his son. If I know anything about Black families, I know that the conversations this book forces one to have are conversations that happen in Black households far earlier. However, it’s use as a literary device allowed Coates to meet his audience halfway. It invites those who have never experienced anything similar to cringe alongside him as a white woman shoves his child in the subway. It forces them understand with the same urgency of parents forced to relay racial commentary to children hypersensitive to the names of black youth on the evening news.

Our majority Black book club found countless experiences in this book to empathize with, especially the men. Despite enjoying the book as a conversation piece that validated many personal thoughts, I didn’t find it without fault. The section on September 11th seemed written solely for shock value, but I’ve been a lone critic. I understand its purpose in a book about a man discussing how race influences his relationship with citizenship.  We also discussed the absence of women in the book, because they seemed to be merely on the peripheries (if present at all). Again, in a book posited as from father to son, it wasn’t surprising.

While they were wildly different in style, voice and purpose, both The Beautiful Struggle and Between the World and Me were great. I gave explanatory and humane TBS a 3.5 out of 5, and the argumentative and exploratory BTWAM a 4.5 out of 5. Stylistically choosing between the two is easy, with BTWAM as a clear winner. It was fantastically problematic, making it a great choice for book clubs and discussions.

Have you read either of these books? Neither? Are you a Coates fan who hasn’t had the chance to make the transition from his work at The Atlantic to his published books? Let me know in the comments!

Have something to say? Put it here! Cancel reply

I'm just a 20-something with a love for multicultural literature and hot tea. Follow my blog for book reviews, critical analysis, and deeply steeped tea!